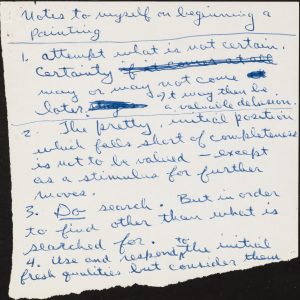 Diebenkorn preferred to let his art speak for itself and felt writing should be left to those who did so professionally. “Sometimes I feel I’m just too lazy or cowardly to speak up,” he once said. “But at other times I do speak up, and then I may really regret the way I’ve phrased something.”[1] He did, however, leave behind an informal record of his thoughts on making art and being a painter. Many of his writings show erasures or strikethroughs, revealing how he worked through his musings, reflections, struggles, and discoveries.

Newly digitized as part of processing his archives, a group of studio notes by Richard Diebenkorn are now available to a wider audience online. The facsimiles remained largely unseen by the general public until now, published in their original form only once before in Richard Diebenkorn: The Catalogue Raisonné released in 2016. Prior to the four-volume publication, the texts were shared with a few curators and writers over the years, and transcriptions of some of them have appeared in earlier publications on the artist.[2]