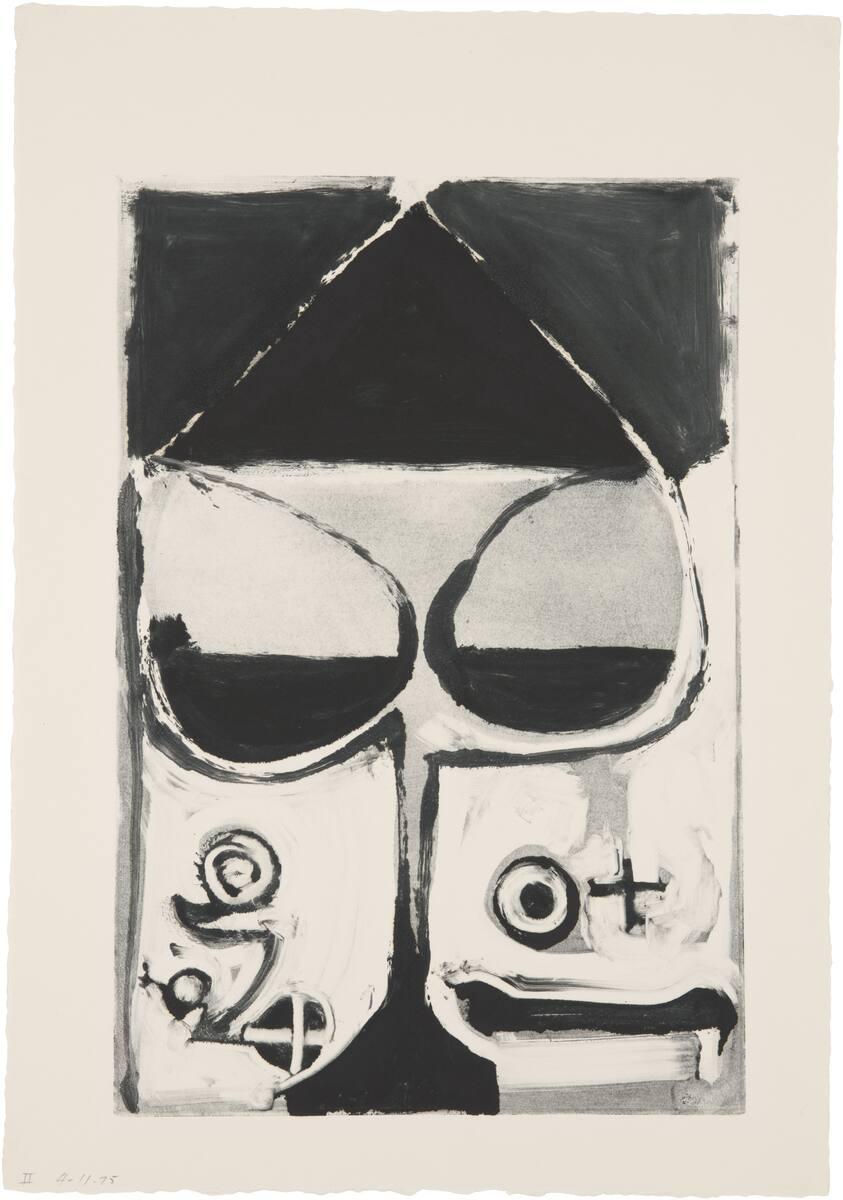 "FEBRUARY 1976: Gerald Nordland organizes a show of Diebenkorn’s monotypes, which opens at the Frederick S. Wight Art Gallery at UCLA; the show tours through university galleries across the country, ending at Stanford University in 1977. Diebenkorn discusses the monotypes with Henry Seldis at his studio on Ashland and Main: 'As abstract as they are, all my recent works are referential to observations in nature. In the late ’40s I tried to get all of that out of my work but now I just accept it. My work cannot be called nonobjective....For now, at least, I got this medium of work out of my system....For me making drawings and paintings never exhausts themselves in this way. I am looking forward to moving into a new studio, made to my specification, soon, after nine years in this spacious old loft.'" —Chronology from Richard Diebenkorn: The Catalogue Raisonné, Vol. 1 (Yale University Press, 2016)

"It is thought that seeing all of the work, good or great, unfulfilled or abortive, would serve to provide insight into the artist's way of working in achieving the integration necessary to make a work of art." —Excerpt from the exhibition catalogue Richard Diebenkorn Monotypes (Frederick S. Wight Art Gallery, University of California, Los Angeles, 1976)

"'Perhaps the Santa Monica series seems more severe to you, not only because it was edited from a far larger number of monotypes but also because I seem to have wanted to keep things out of the compositions. Perhaps the intensity of my experience at Nate's studio at Stanford opened up more possibilities to me and I let in a lot more things. Later, I let Jerry Nordland (UCLA's art galleries director) persuade me to show this batch unedited.'" —Richard Diebenkorn said to Henry J. Seldis (Los Angeles Times, 17 February 1976)

"The consecutive and unedited series of prints in the exhibit allows viewers to compare one print with another, to observe which portions of the image he retains, which he eliminates — in effect, to look over his shoulder as he creates. In Gerald Nordland's words, 'tracing these pentimenti backward and forward through a series is one of the pleasures available here.'" —Artweek (22 February 1977)