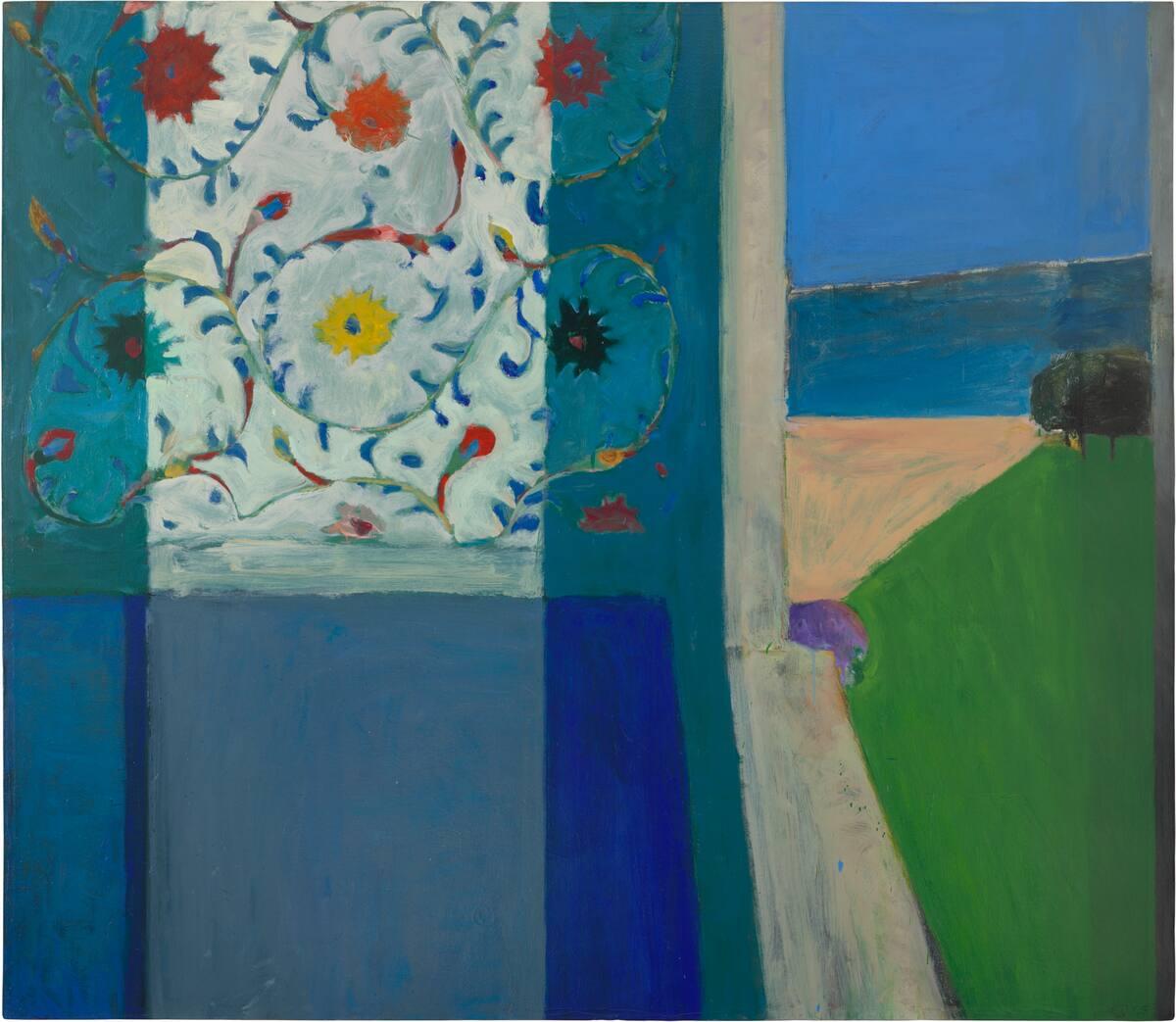 "The Diebenkorns travel to Buffalo with their family, spending two weeks on the East Coast for the opening and attending each subsequent event except for the one in Cincinnati. Diebenkorn arrives early at each venue he visits to help with installation. About the retrospective, Phyllis said, 'It was major...this one sort of made Dick national. He was pretty well-known in the art world, but this...did it.' During a brief interview with Jeff Simon in the Albright-Knox permanent collection galleries, Diebenkorn states, 'It’s awfully easy to throw around labels like provincialism. But I don’t accept that model from 19th century France where there were provinces and the great center. I pick up the light and the characteristic color of where I work...also a spatiality. It sounds like such a cliché to say the West is spacious. So is the Hudson River Valley....(Points to the work on the walls around him). I don’t see how the work could exist without Matisse, without Cézanne, Matisse is the strongest single influence. The people who pulled me into fine art when I was young were Hopper, mainly, then [Charles] Sheeler.'" —Chronology from Richard Diebenkorn: The Catalogue Raisonné, Vol. 1 (Yale University Press, 2016)

"Richard Diebenkorn's work has changed considerably as it has evolved over three decades, demonstrating the artist's capacity for continuous self-criticism and awareness rarely matched by any of his contemporaries. This willingness to transform his images radically has been misinterpreted by some art critics who see these shifts as signs of weakness. The opposite is the case: Diebenkorn comprehends the nature of art at its most fundamental as a mutating, vibrant, and even evolving force contrasted to packaged and predictable presentations." —Foreword by Robert T. Buck, Jr. in the exhibition catalogue Richard Diebenkorn: Paintings and Drawings, 1943–1976 (Albright-Knox Art Gallery, 1976)

"Diebenkorn's color was dry, sunbaked desert color, adulterated with California neon and smudge. His line took its time, wandering around, speeding up, then trickling off into nothing, like a mountain freshet that ends up dissolving somewhere in a sandy gulch." —"Diebenkorn Reconsidered" by Budd Hopkins (Artforum, March 1977)

"He is not, as the condescending tag once read, a California artist, but a world figure. He is not an avant-gardist either, and his work keeps alluding to its sources: the color to Bonnard and Matisse, the strong fractionally unstable drawing to Mondrian and Matisse again. Diebenkorn’s best paintings mediate between the moral duty to acknowledge the ancestor and the desire to claim one’s own experience as unique, unrepeatable. In short, he is a thoroughly traditional artist, for whose work the words 'high seriousness' might have been invented." —“California in Eupeptic Color" by Robert Hughes (Time, 27 June 1977)

"...a single painting can effortlessly become your entire world. A single line can envelop you with its intensity and placement, even in the noisy and crowded setting of a museum gallery." —"Richard Diebenkorn: Island in the sun" by Cathy Curtis (The Daily Californian, 11 November 1977)

"Diebenkorn at his best is an enormously ingratiating artist, seducing the viewer's attention through sensuous manipulation of paint and glowing colors, appealing frankly to the tactile as well as the optical nerve." —"Richard Diebenkorn: Pacific Extensions by Nancy Marmer (Art in America, January/February 1978)