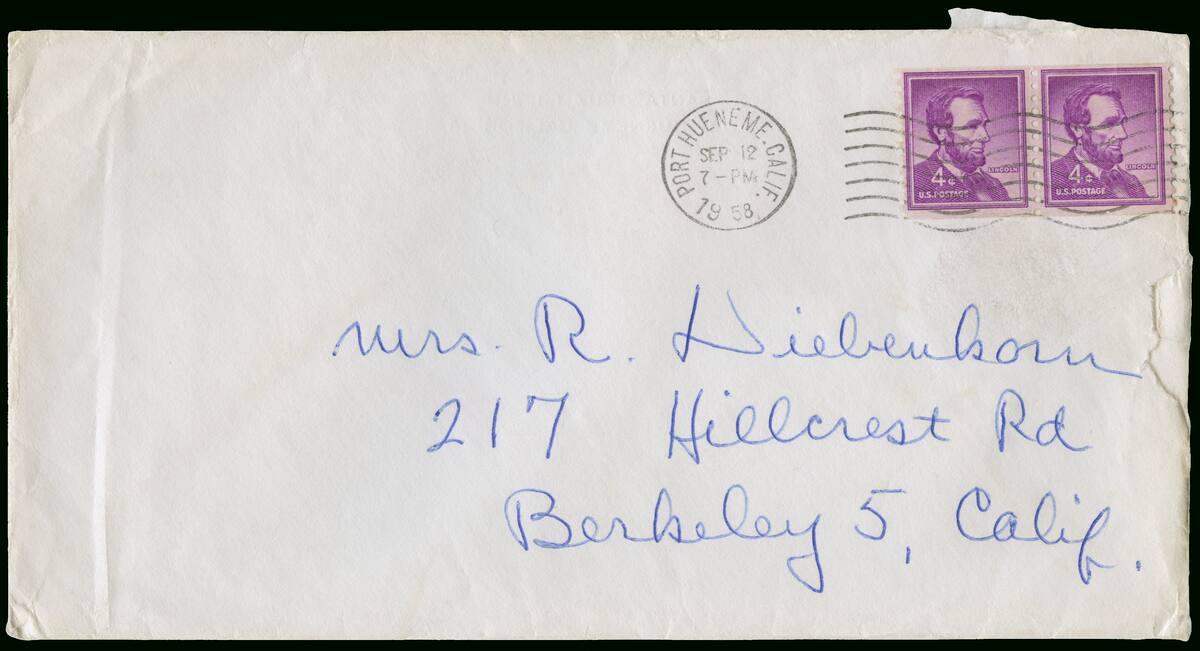 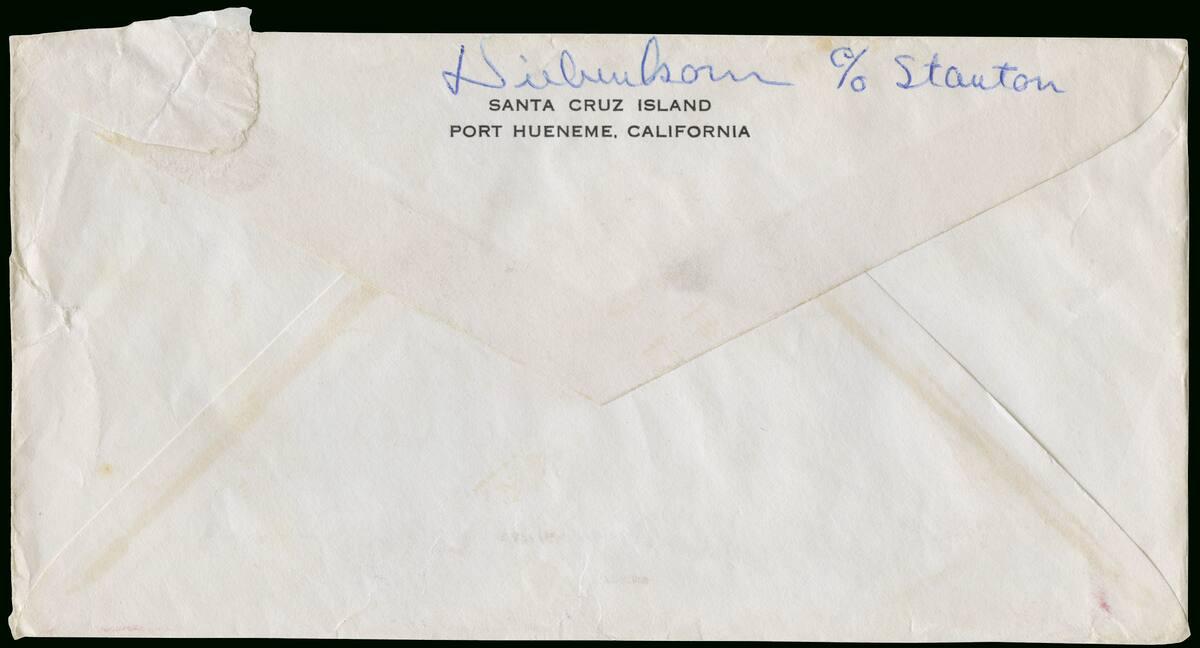 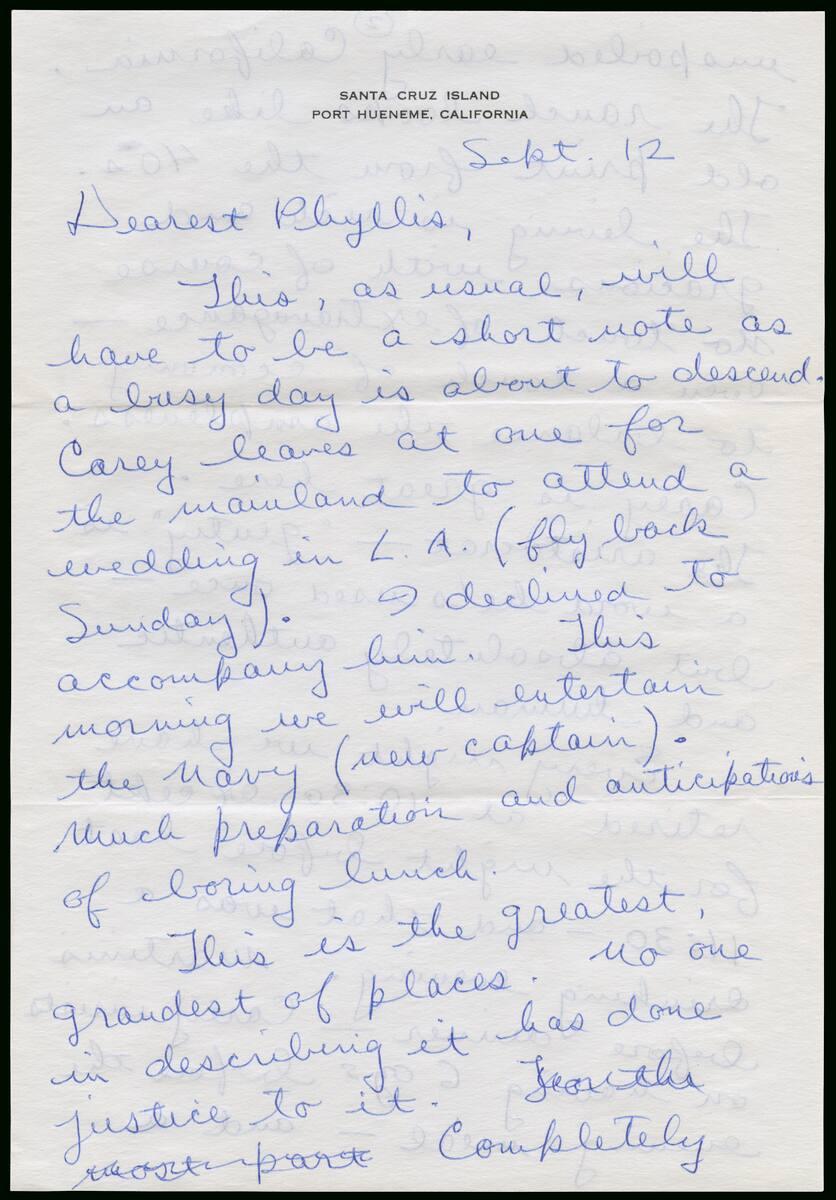 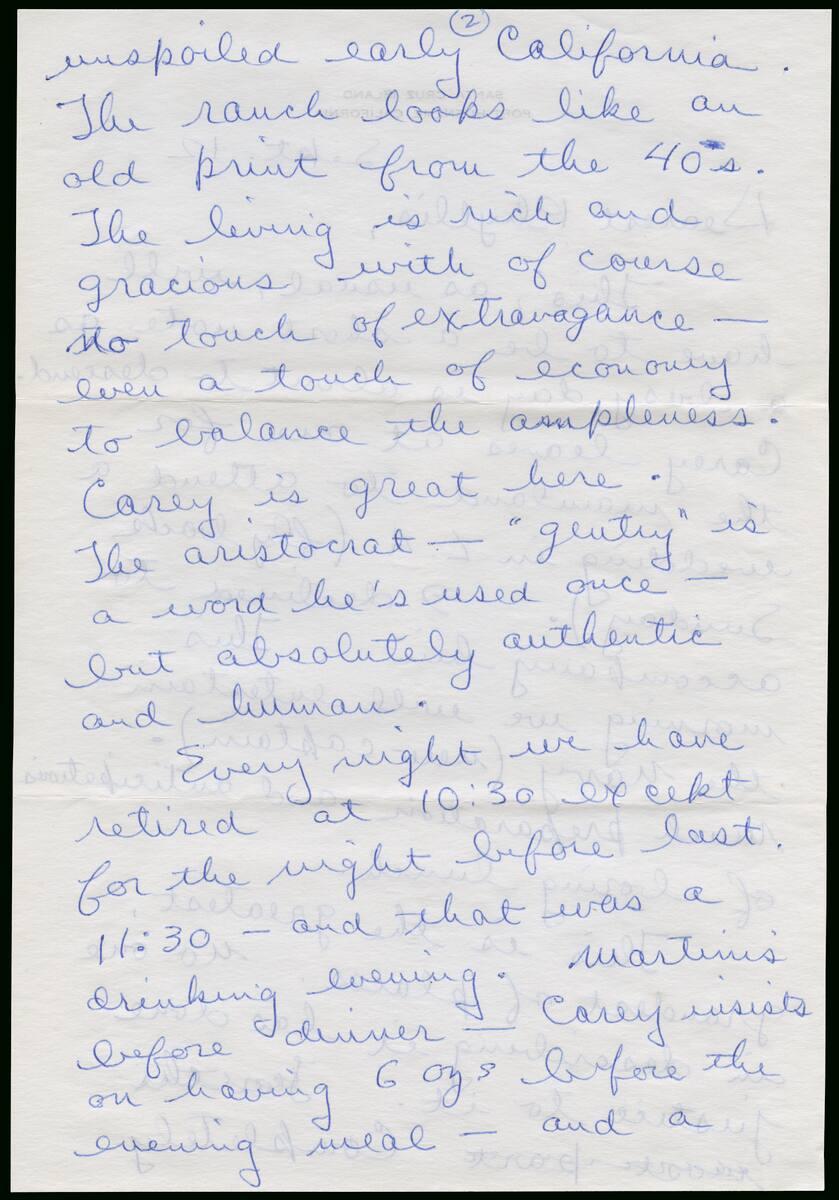 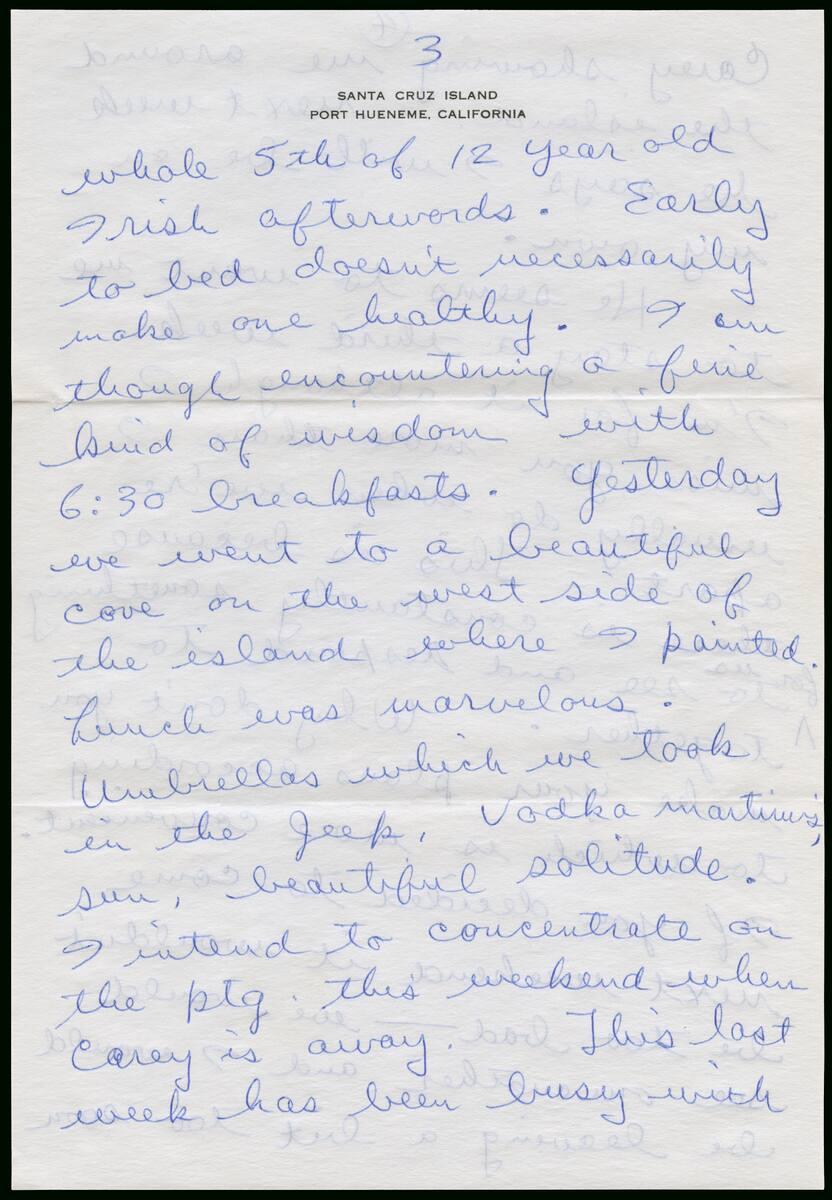 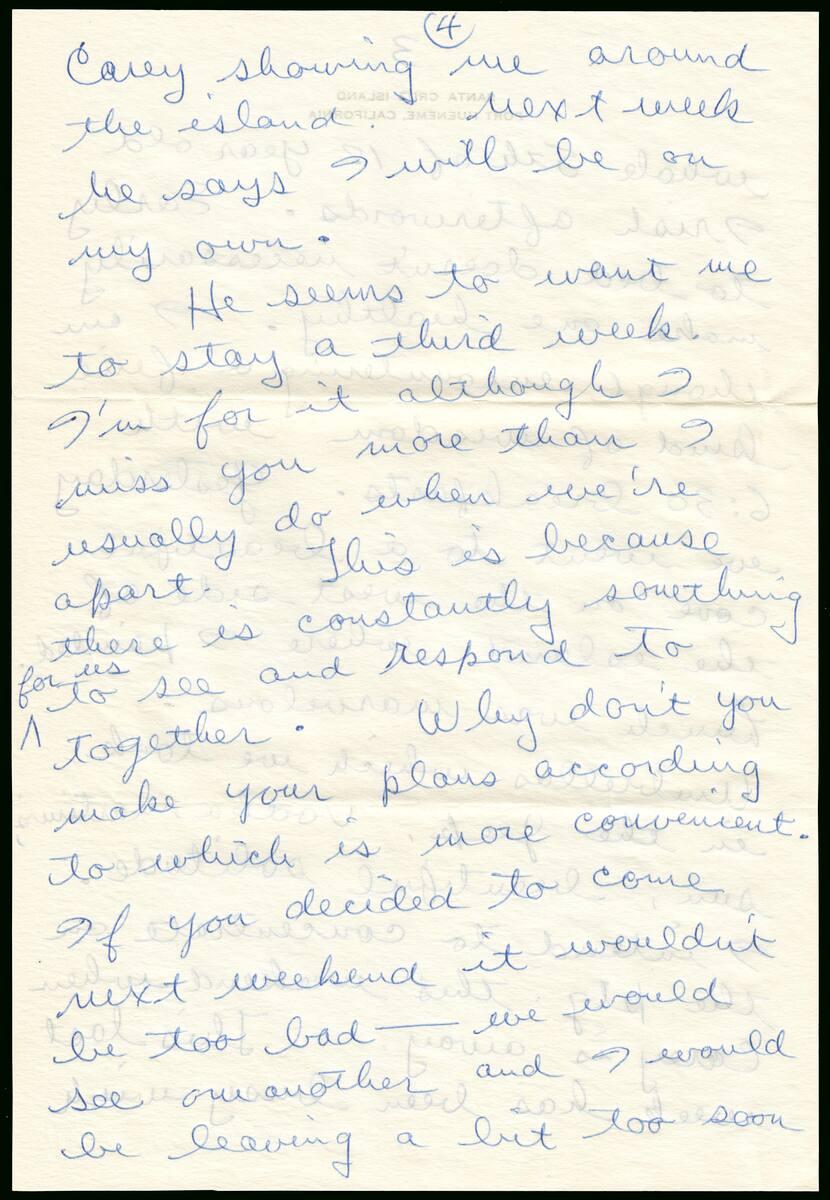 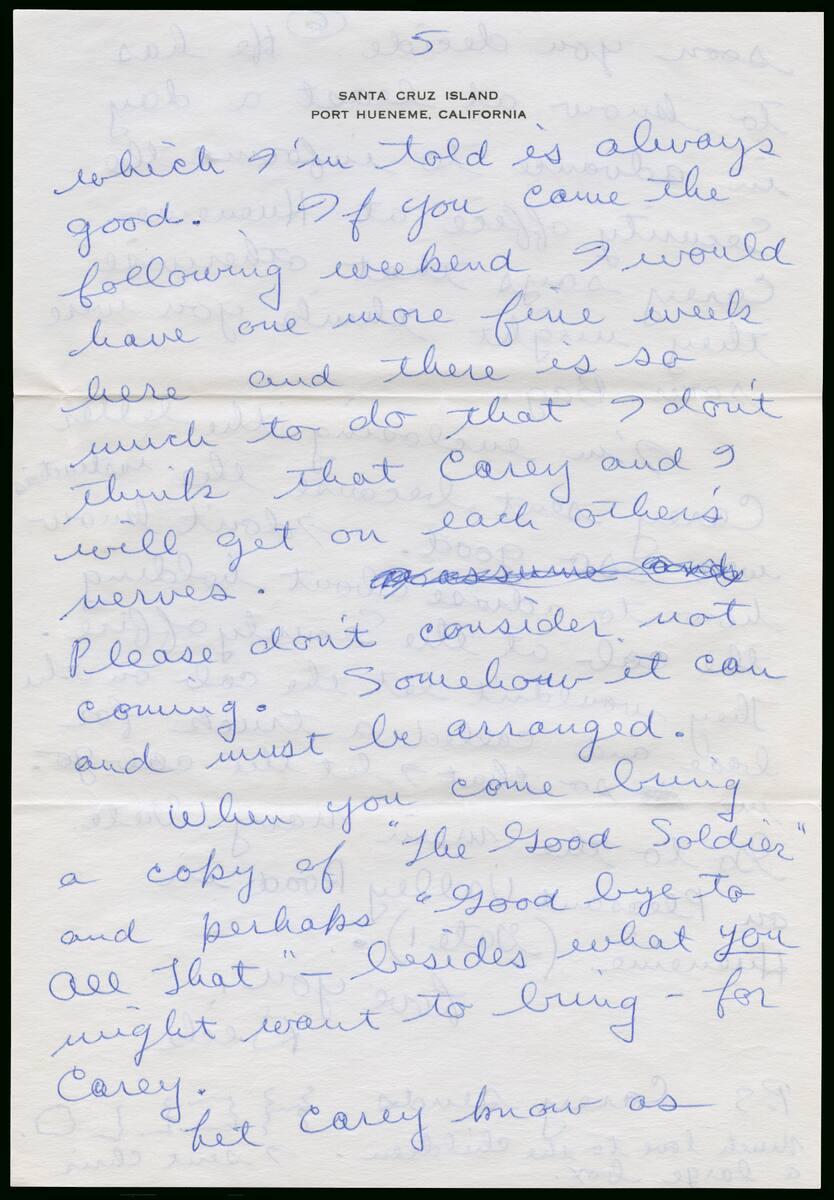 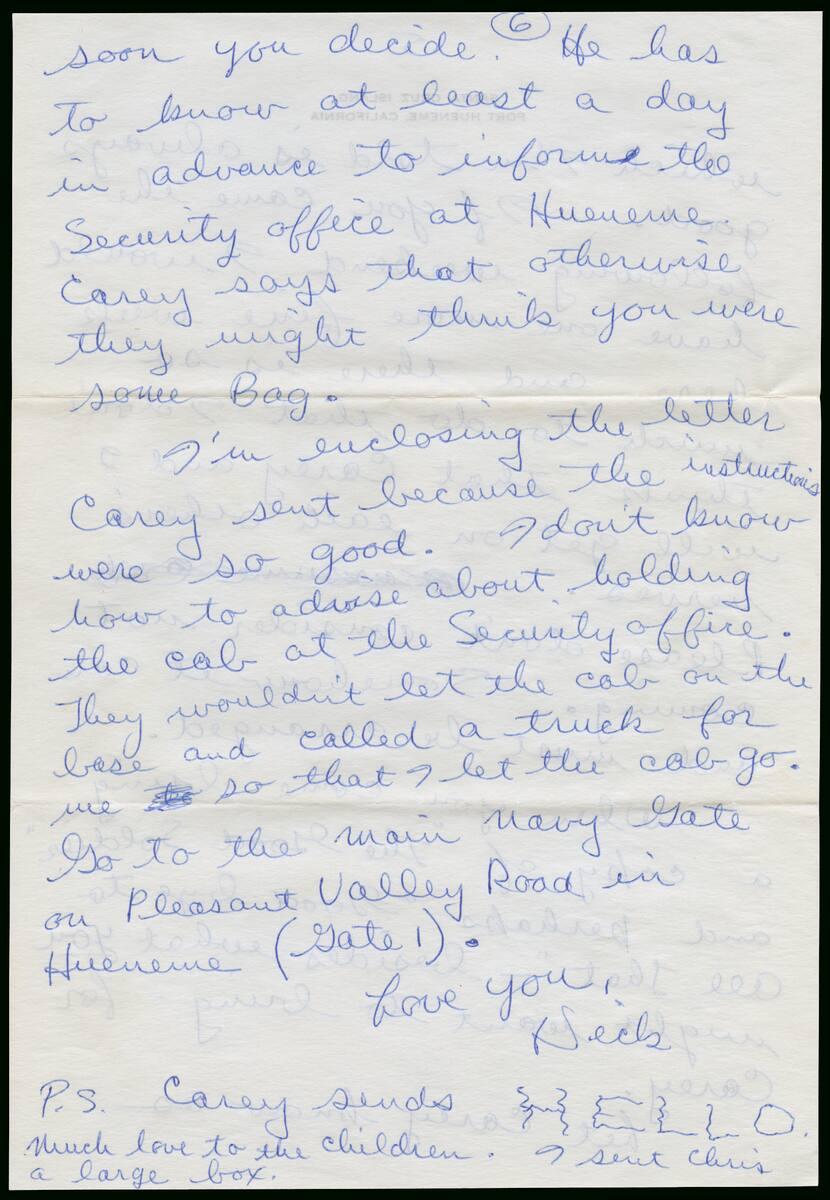 Diebenkorn met Stanton while they were undergraduates at Stanford University, and they became lifelong friends. Stanton was Diebenkorn's best man at his wedding to Phyllis in 1943.

Stanton's family purchased nine-tenths of Santa Cruz Island, one of the California Channel Islands off the coast of Santa Barbara, in 1937, and Stanton moved their permanently in 1957. Diebenkorn traveled to the island for the first time in 1958 and returned thirty-seven times over the course of his lifetime.

The artist traveled to what he referred to as "Carey's Island" almost every year, sometimes twice, until Stanton's death in 1988. He was frequently joined by his wife Phyllis and their children, celebrating the occasional holiday or birthday. The Santa Cruz Island Foundation's book Richard Diebenkorn and Carey Stanton: A Private Collection offers a personal account of the two men's friendship and the presence of the island in the Diebenkorns' lives. Also, read our From the Basement feature "Meeting Santa Cruz Island" under the Archives menu bar on diebenkorn.org.

This, as usual, will have to be a short note as a busy day is about to descend. Carey leaves at one for the mainland to attend a wedding in L.A. (fly back Sunday). I declined to accompany him. This morning we will entertain the Navy (new captain). Much preparation and anticipations of boring lunch.

This is the greatest, grandest of places. No one in describing it has done justice to it. Completely unspoiled early California. The ranch looks like an old print from the 40s. The living is rich and gracious with of course no touch of extravagance — even a touch of economy to balance the ampleness. Carey is great here. The aristocrat — “gentry” is a word he’s used once — but absolutely authentic and human.

Every night we have retired at 10:30 except for the night before last. 11:30 — and that was a drinking evening. Martinis before dinner — Carey insists on having 6 ozs before the evening meal — and a whole 5th of 12 year old Irish afterwards. Early to bed doesn’t necessarily make one healthy. I am though encountering a fine kind of wisdom with 6:30 breakfasts. Yesterday we went to a beautiful cove on the west side of the island where I painted. Lunch was marvelous. Umbrellas which we took in the Jeep, vodka martinis, sun, beautiful solitude. I intend to concentrate on the ptg. this weekend when Carey is away. This last week has been busy with Carey showing me around the island. Next week he says I will be on my own.

He seems to want me to stay a third week. I’m for it although I miss you more than I usually do when we’re apart. This is because there is constantly something for us to see and respond to together. Why don’t you make your plans according to which is more convenient. If you decide to come next weekend it wouldn’t be too bad — we would see one another and I would be leaving a bit too soon which I’m told is always good. If you came the following weekend I would have one more fine week here and there is so much to do that I don’t think Carey and I will get on each other’s nerves. Please don’t consider not coming. Somehow it can and must be arranged.

When you come bring a copy of “The Good Soldier” and perhaps “Goodbye to All That” — besides what you might want to bring — for Carey.

Let Carey know as soon as you decide. He has to know at least a day in advance to inform the security office at Hueneme. Carey says that otherwise they might think you were some bag.

I’m enclosing the letter Carey sent because the instructions were so good. I don’t know how to advise about holding the cab at the security office. They wouldn’t let the cab on the base and called a truck for me so that I let the cab go. Go to the main Navy Gate on Pleasant Valley Road in Hueneme (Gate 1).

P.S. Carey sends HELLO. Much love to the children. I sent Chris a large box.