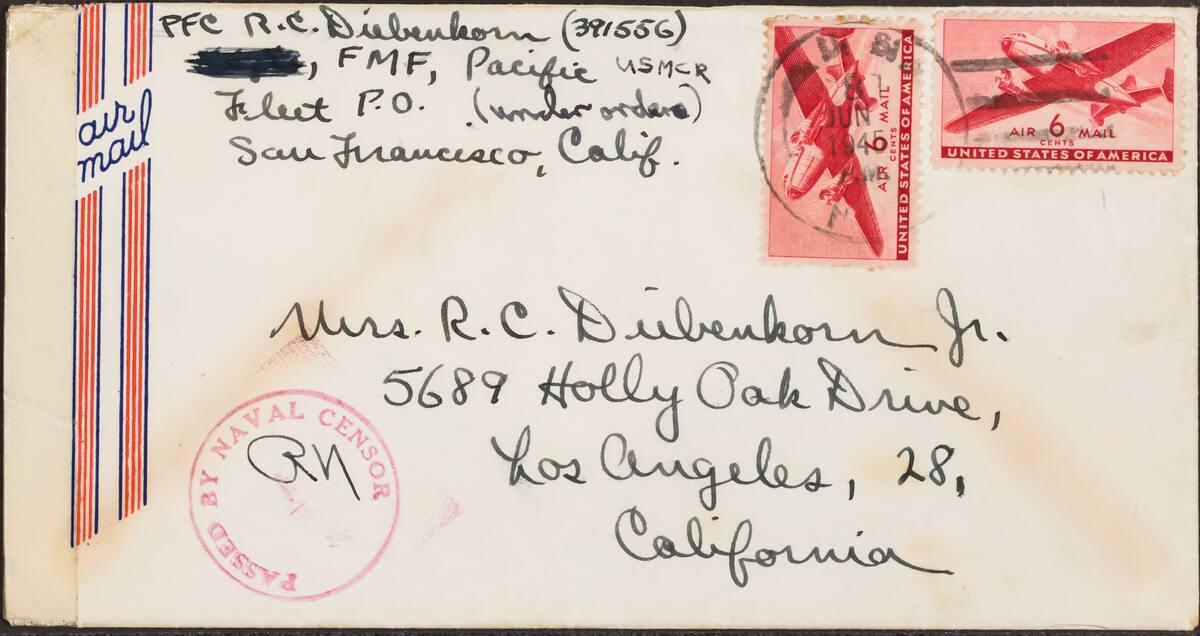 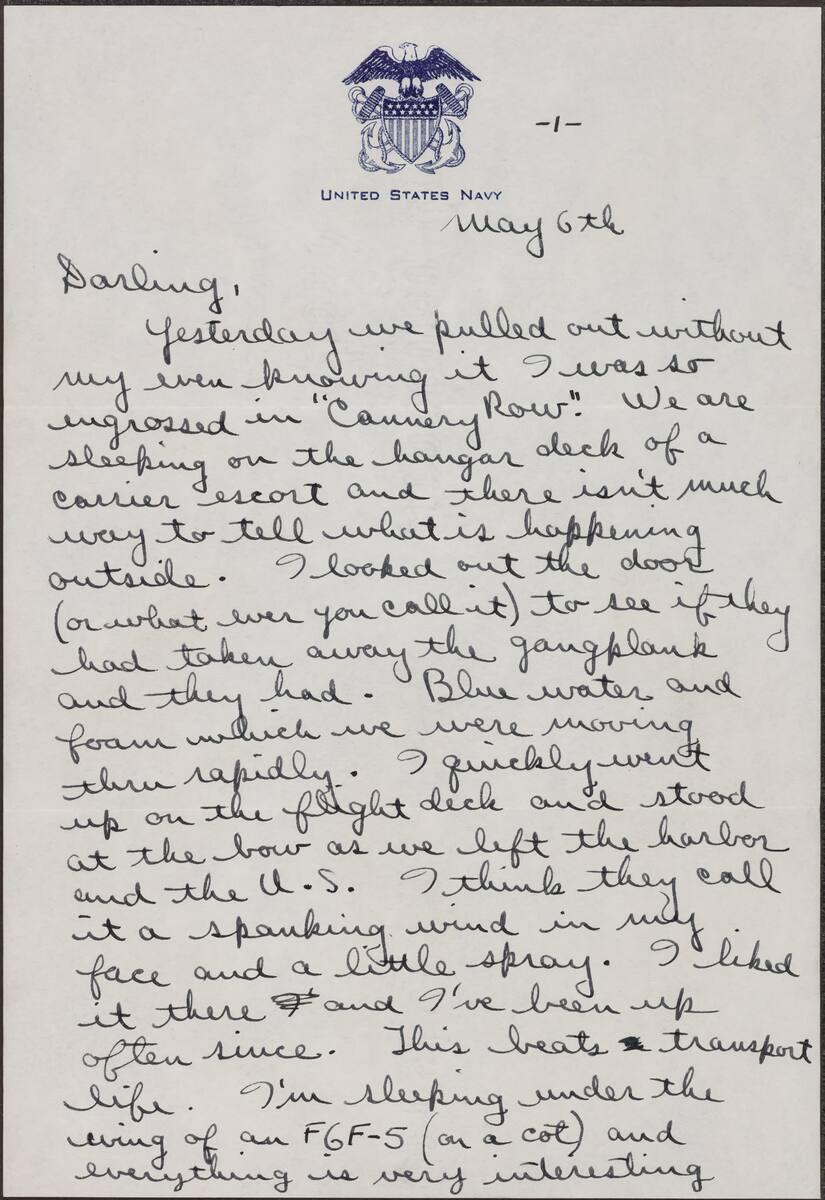 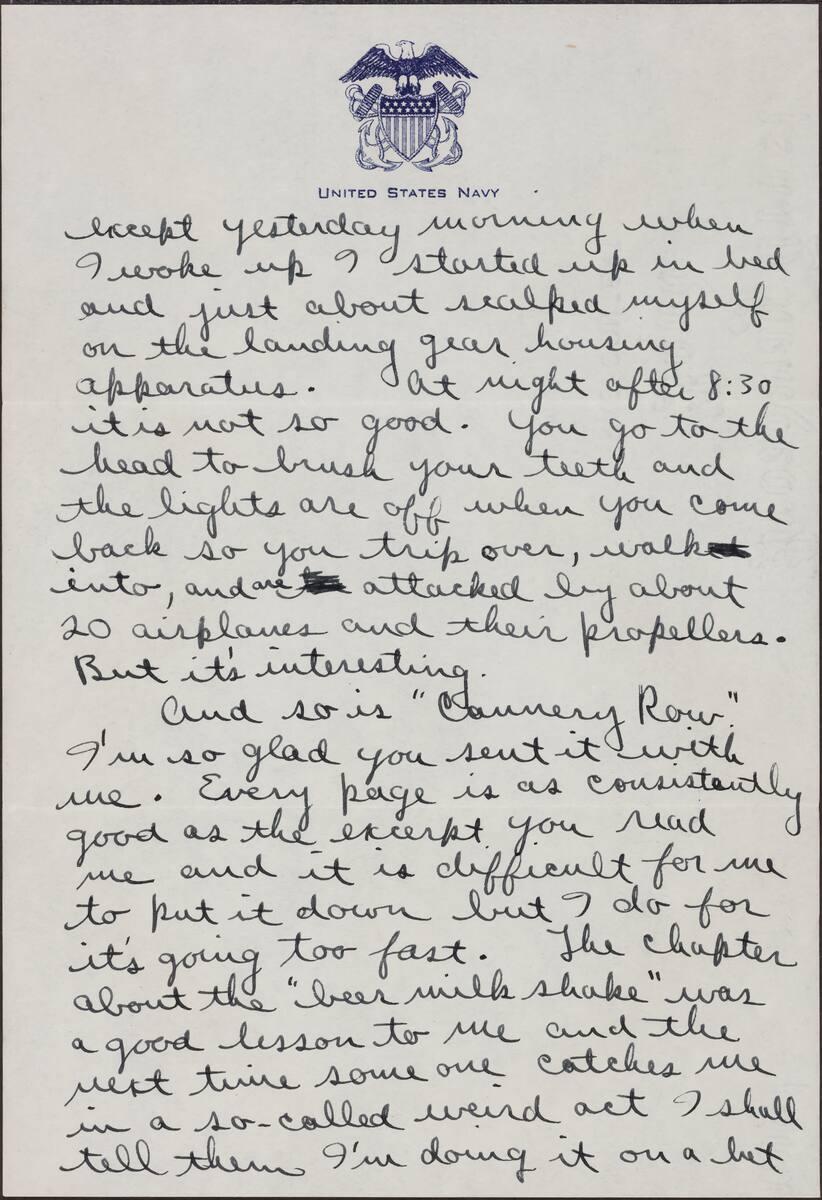 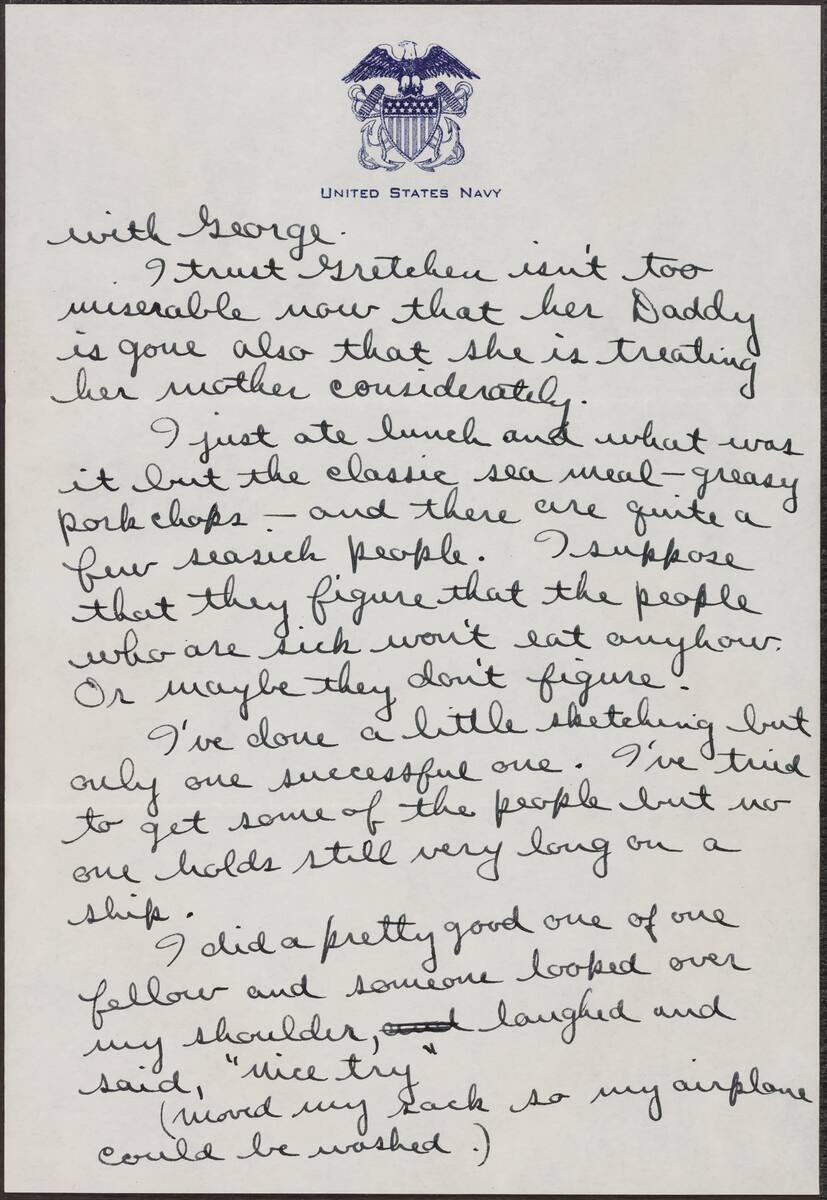 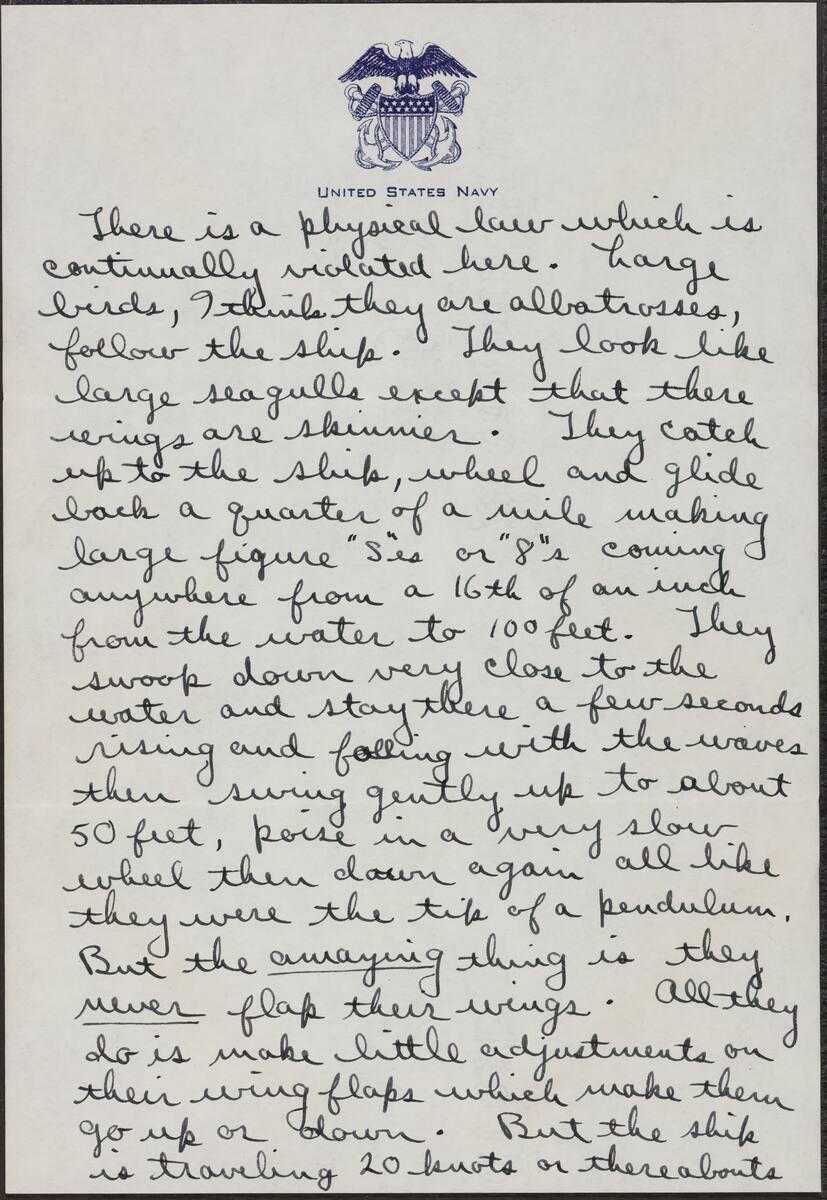 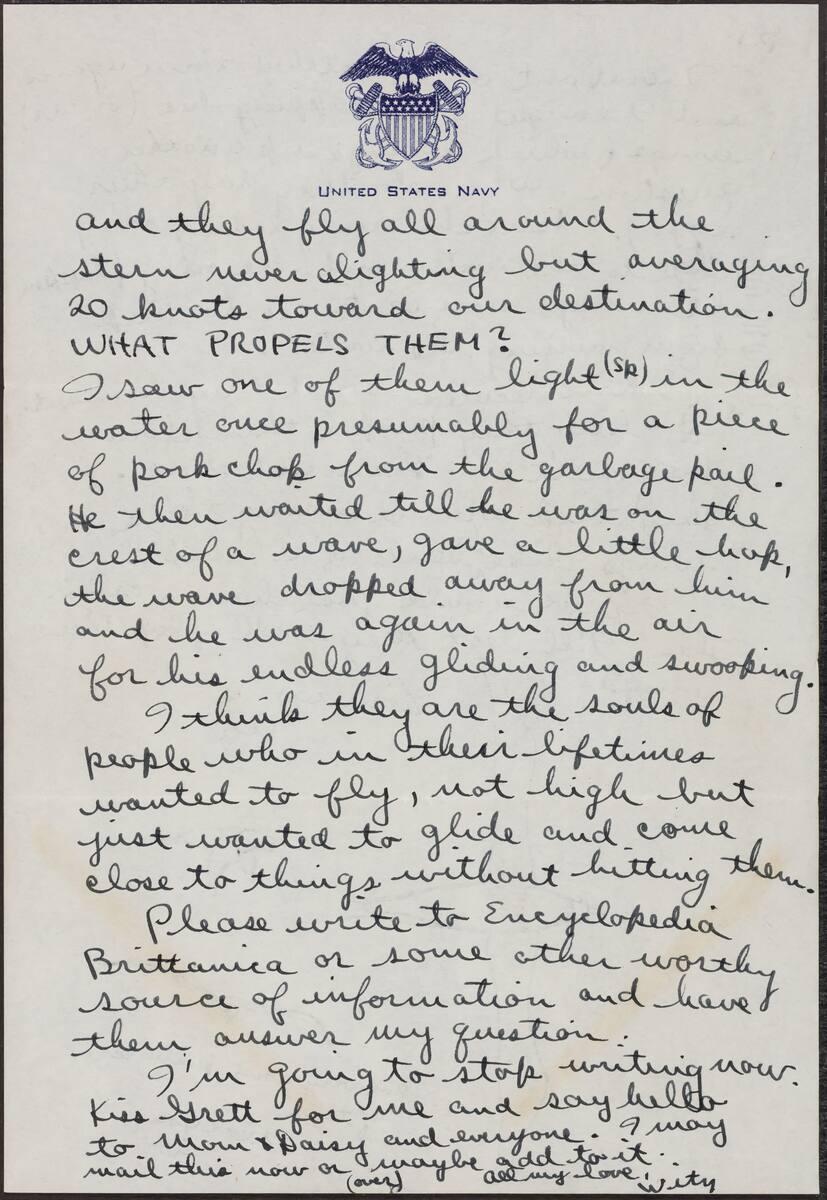 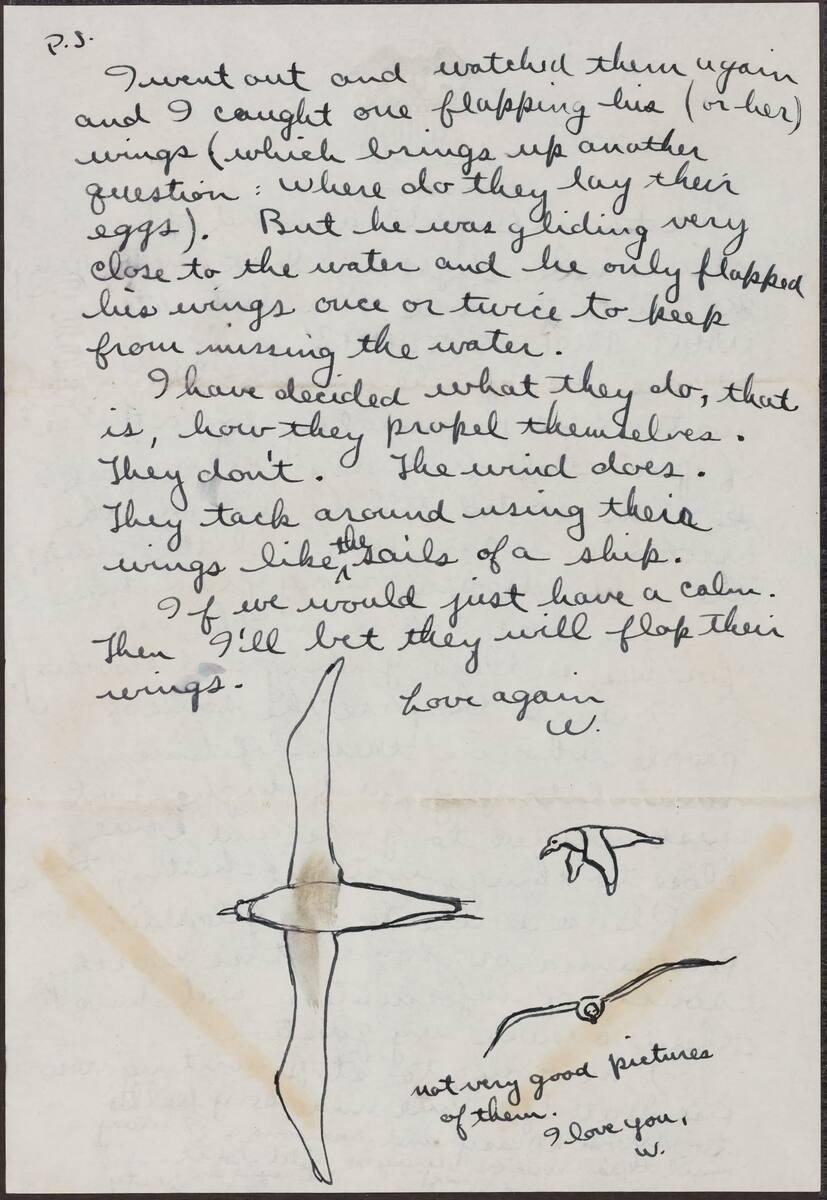 Yesterday we pulled out without my even knowing it I was so engrossed in "Cannery Row." We are sleeping on the hanger deck of a carrier escort and there isn't much way to tell what is happening outside. I looked out the door (or what ever you call it) to see if they had taken away the gangplank and they had. Blue water and foam which we were moving then rapidly. I quickly went up on the flight deck and stood at the bow as we left the harbor and the U.S. I think they call it a spanking wind in my face and a little spray. I liked it there and I've been up often since. This beats transport life. I'm sleeping under the wing of an F6F-5 (on a cot) and everything is very interesting except yesterday morning when I woke up I started up in bed and just about scalped myself on the landing gear housing apparatus. At night after 8:30 it is not so good. You go to the head to brush your teeth and the lights are off when you come back so you trip over, walk into, and are attacked by about 20 airplanes and their propellers. But it's interesting.

And so is "Cannery Row." I'm so glad you sent it with me. Every page is as consistently good as the excerpt you read me and it is difficult for me to put it down but I do for it's going too fast. The chapter about the "beer milk shake" was a good lesson to me and the next time some one catches me in a so-called weird act I shall tell them I'm doing it on a bet with George.

I trust Gretchen isn't too miserable now that her Daddy is gone also that she is treating her mother considerately.

I just ate lunch and what was it but the classic sea meal — greasy pork chops — and there are quite a few seasick people. I suppose that they figure that the people who are sick won't eat anyhow. Or maybe they don't figure.

I've done a little sketching but only one successful one. I've tried to get some of the people but no one holds still very long on a ship.

I did a pretty good one of one fellow and someone looked over my shoulder, laughed and said, "Nice try"

(Moved my sack so my airplane could be washed.)

There is a physical law which is continually violated here. Large birds, I think they are albatrosses, follow the ship. They look like large seagulls except that there wings are skinnier. They catch up to the ship, wheel and glide back a quarter of a mile making large figure "S"es or "8"s coming anywhere from a 16th of an inch from the water to 100 feet. They swoop down very close to the water and stay there a few seconds rising and falling with the waves then swing gently up to about 50 feet, poise in a very slow wheel then down again all like they were the tip of a pendulum. But the amazing thing is they never flap their wings. All they do is make little adjustments on their wing flaps which make them go up or down. But the ship is traveling 20 knots or thereabouts and they fly all around the stern never alighting but averaging 20 knots toward our destination. WHAT PROPELS THEM?

I saw one of them light (sp) in the water once presumably for a piece of pork chop from the garbage pail. He then waited till he was on the crest of a wave, gave a little hop, the wave dropped away from him and he was again in the air for his endless gliding and swooping.

I think they are the souls of people who in their lifetimes wanted to fly, not high but just wanted to glide and come close to things without hitting them.

Please write to Encyclopedia Brittanica or some other worthy source of information and have them answer my question.

I'm going to stop writing now. Kiss Grett for me and say hello to Mom + Daisy and everyone. I may mail this now or maybe add to it.

(over) All my love,
Witz

I went out and watched them again and I caught one flapping his (or her) wings (which brings up another question: Where do they lay their eggs). But he was gliding very close to the water and he only flapped his wings once or twice to keep from missing the water.

I have decided what they do, that is, how they propel themselves. They don't. The wind does. They tack around using their wings like the sails of a ship.

If we would just have a calm. Then I'll bet they will flap their wings.

Not very good pictures of them.