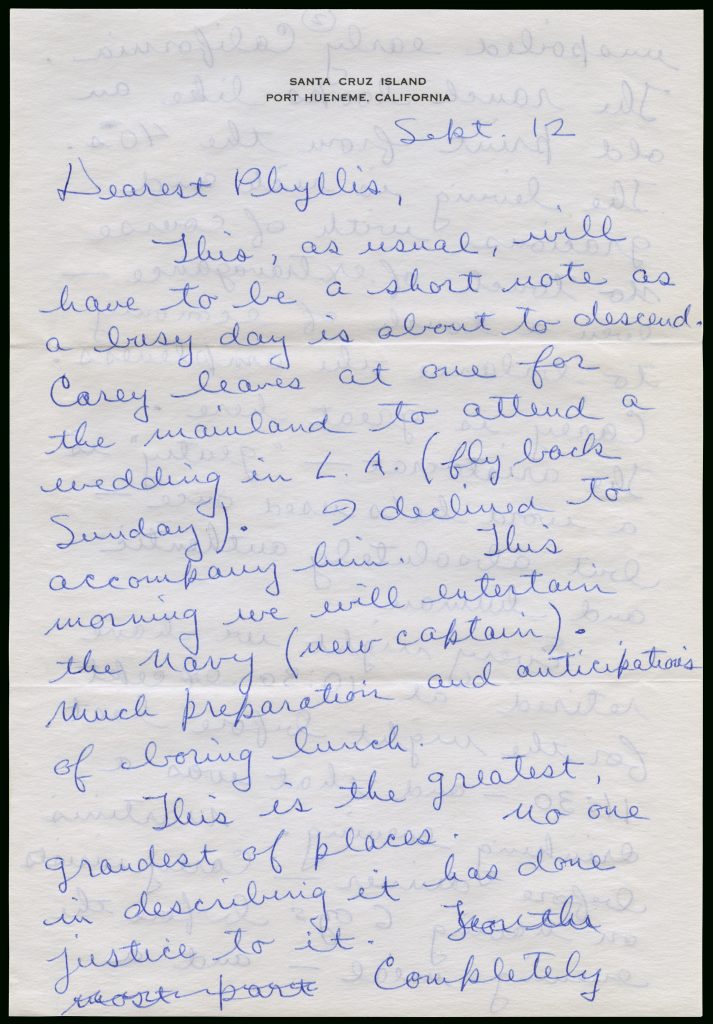 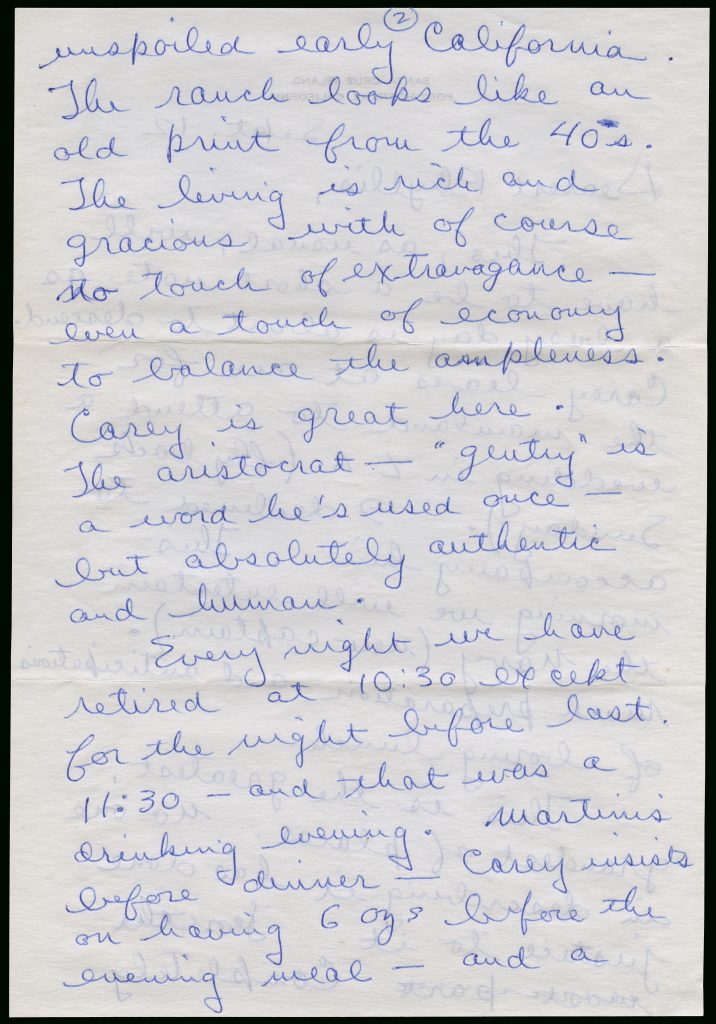 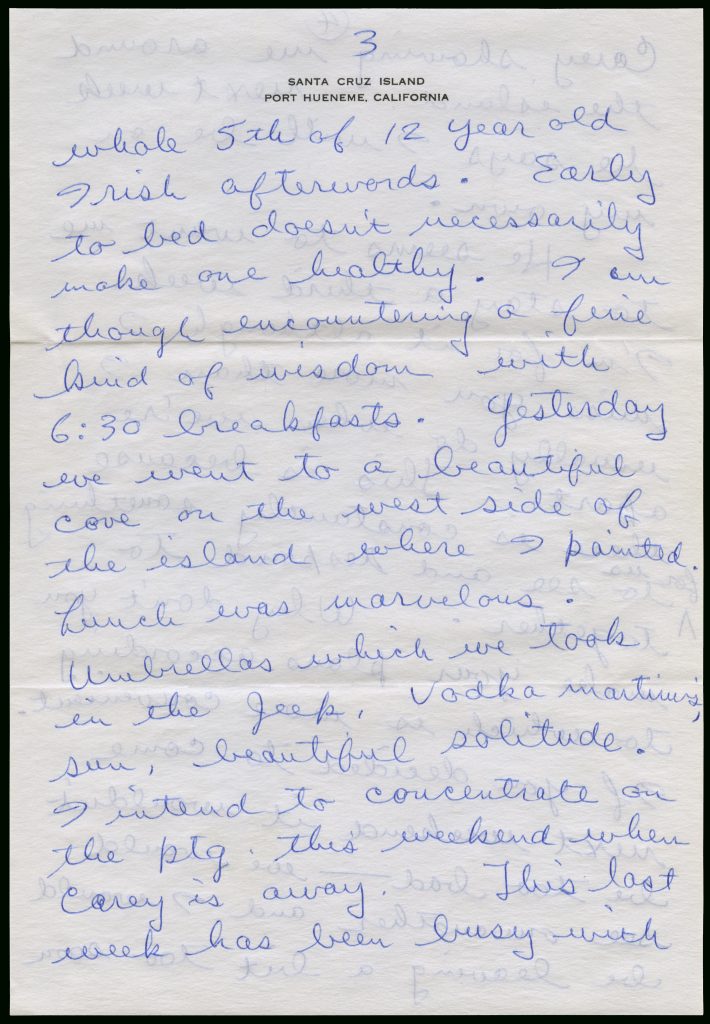 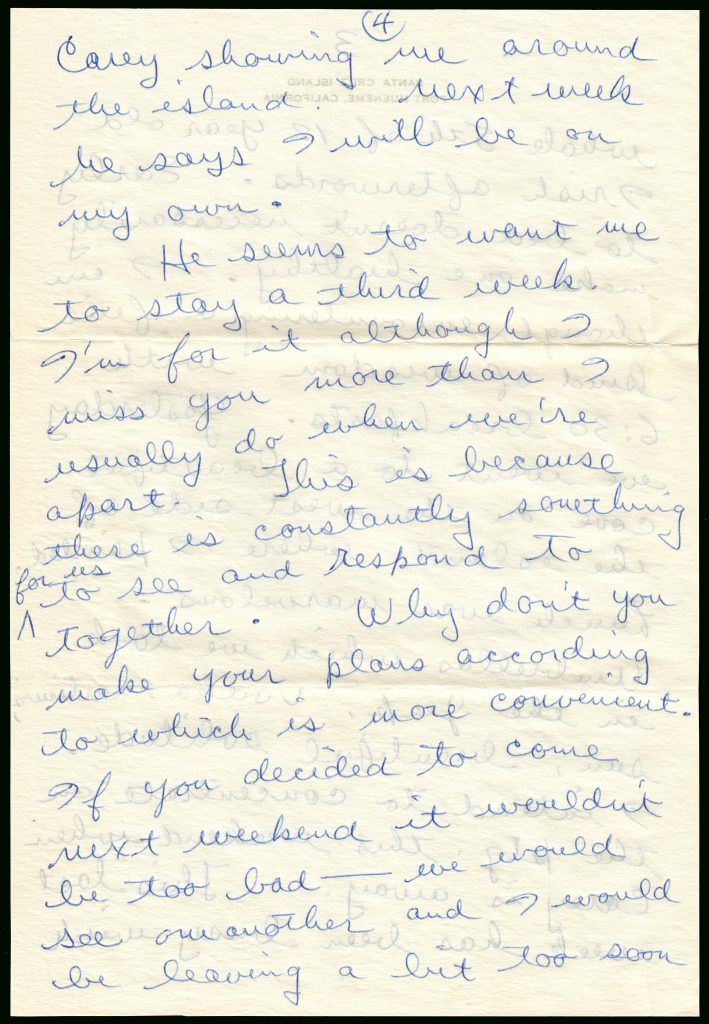 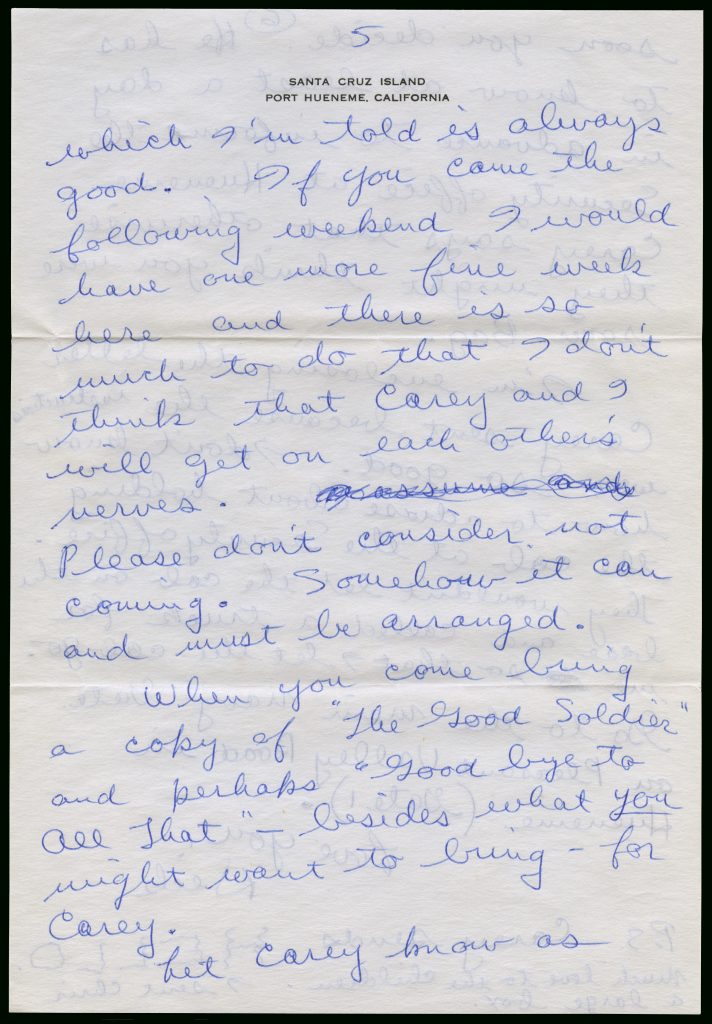 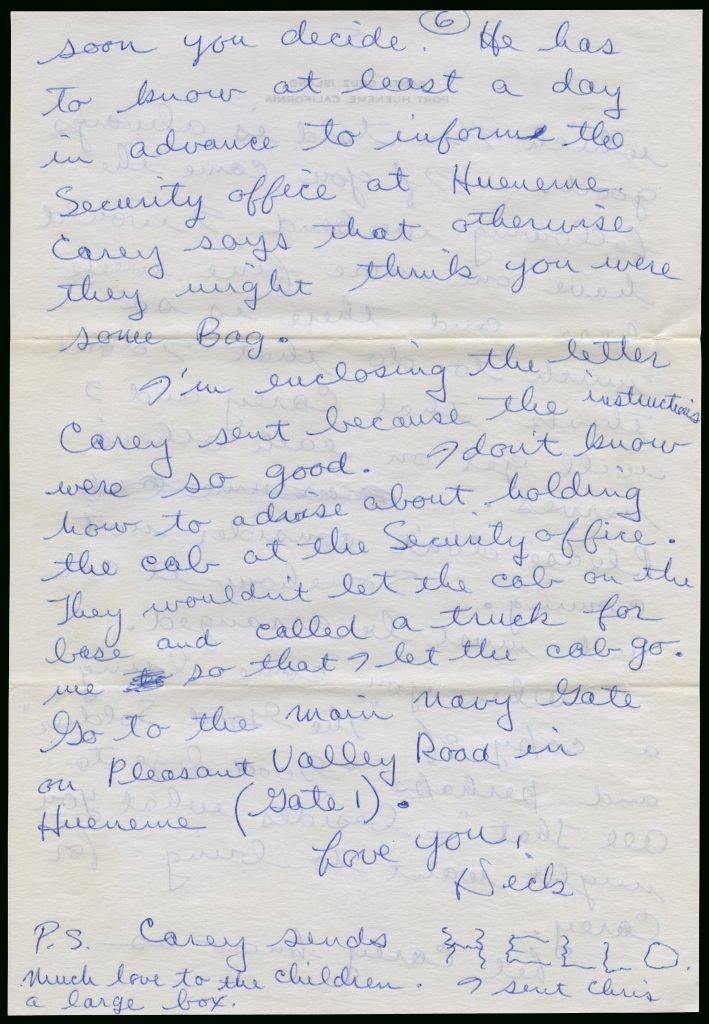 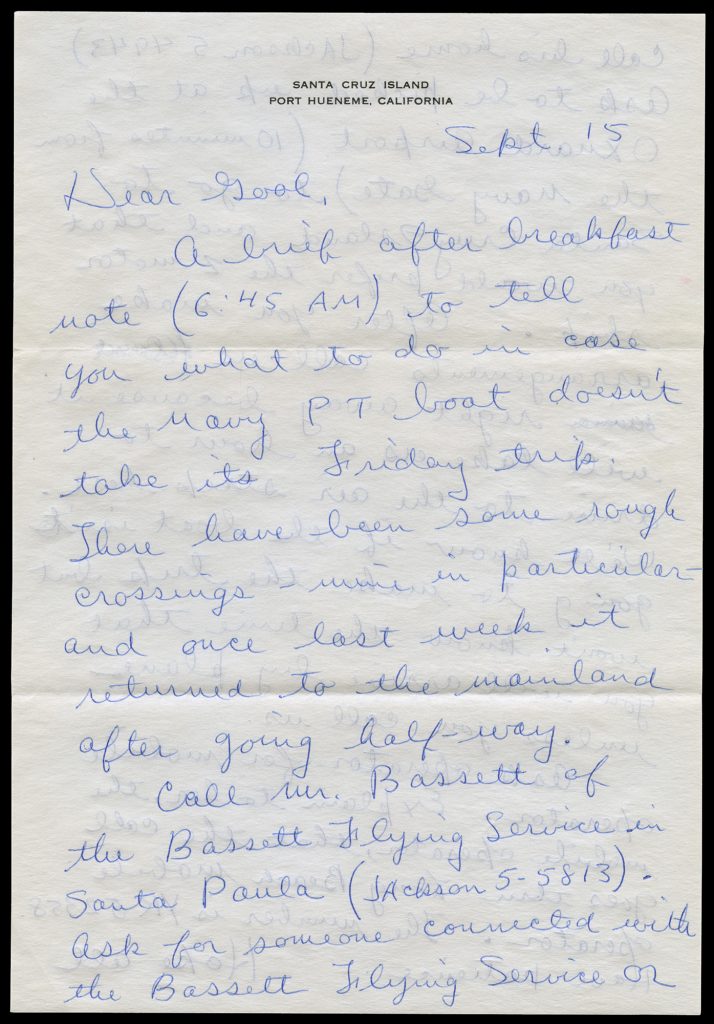 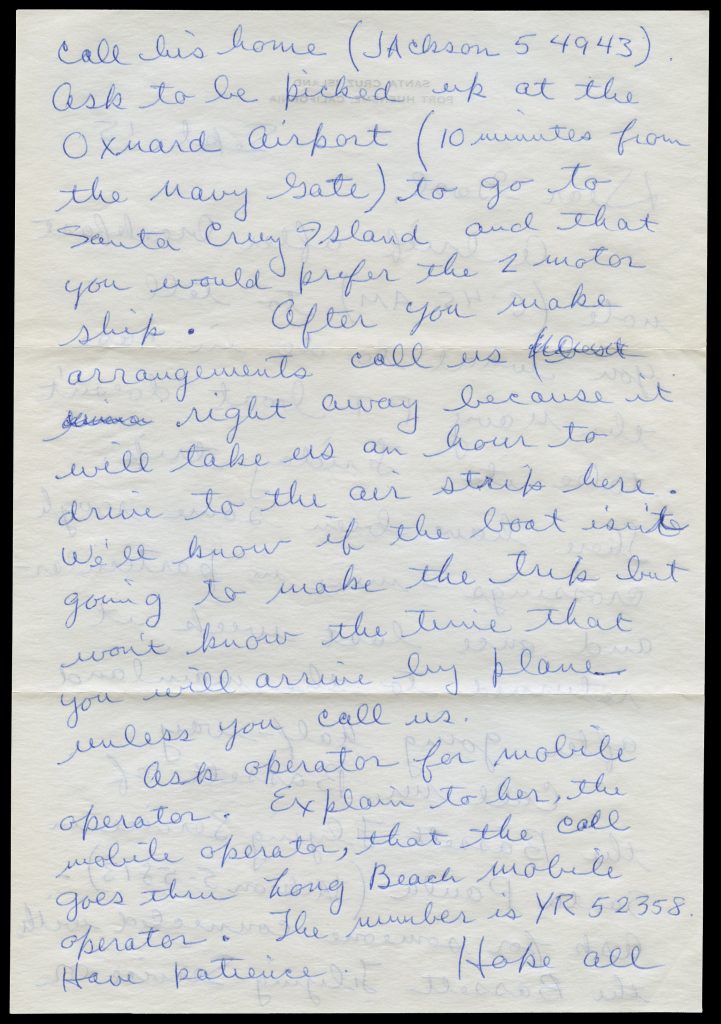 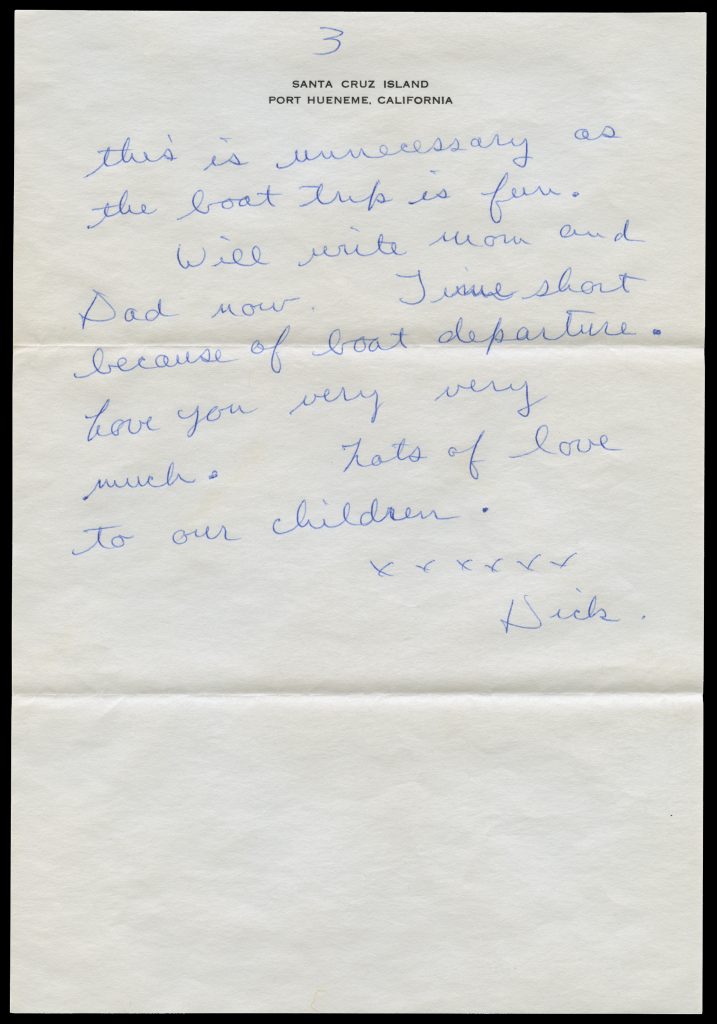 This, as usual, will have to be a short note as a busy day is about to descend. Carey leaves at one for the mainland to attend a wedding in L.A. (fly back Sunday). I declined to accompany him. This morning we will entertain the Navy (new captain). Much preparation and anticipations of boring lunch.

This is the greatest, grandest of places. No one in describing it has done justice to it.  Completely unspoiled early California. The ranch looks like an old print from the 40s. The living is rich and gracious with of course no touch of extravagance — even a touch of economy to balance the ampleness. Carey is great here. The aristocrat — “gentry” is a word he’s used once — but absolutely authentic and human.

Every night we have retired at 10:30 except for the night before last. 11:30 — and that was a drinking evening. Martinis before dinner — Carey insists on having 6 ozs before the evening meal — and a whole 5th of 12 year old Irish afterwards. Early to bed doesn’t necessarily make one healthy. I am though encountering a fine kind of wisdom with 6:30 breakfasts. Yesterday we went to a beautiful cove on the west side of the island where I painted. Lunch was marvelous. Umbrellas which we took in the Jeep, vodka martinis, sun, beautiful solitude. I intend to concentrate on the ptg. this weekend when Carey is away. This last week has been busy with Carey showing me around the island. Next week he says I will be on my own.

He seems to want me to stay a third week. I’m for it although I miss you more than I usually do when we’re apart. This is because there is constantly something for us to see and respond to together. Why don’t you make your plans according to which is more convenient. If you decide to come next weekend it wouldn’t be too bad — we would see one another and I would be leaving a bit too soon which I’m told is always good. If you came the following weekend I would have one more fine week here and there is so much to do that I don’t think Carey and I will get on each other’s nerves.  Please don’t consider not coming. Somehow it can and must be arranged.

When you come bring a copy of “The Good Soldier” and perhaps “Goodbye to All That” — besides what you might want to bring — for Carey.

Let Carey know as soon as you decide. He has to know at least a day in advance to inform the security office at Hueneme. Carey says that otherwise they might think you were some bag.

I’m enclosing the letter Carey sent because the instructions were so good. I don’t know how to advise about holding the cab at the security office. They wouldn’t let the cab on the base and called a truck for me so that I let the cab go. Go to the main Navy Gate on Pleasant Valley Road in Hueneme (Gate 1).

P.S. Carey sends HELLO. Much love to the children. I sent Chris a large box.

A brief after breakfast note (6:45 AM) to tell you what to do in case the Navy PT boat doesn’t take its Friday trip. There have been some rough crossings – mine in particular – and once last week it returned to the mainland after going half-way.

Call Mr. Bassett of the Bassett Flying Service in Santa Paula (JAckson 5-5813). Ask for someone connected with Bassett Flying Service or call his home (JAckson 5 4943). Ask to be picked up at the Oxnard Airport (10 minutes from the Navy Gate) to go to Santa Cruz Island and that you would prefer the 2 motor ship. After you make arrangements call us right away because it will take up an hour to drive to the air strip here. We’ll know if the boat isn’t going to make the trip but won’t know the time that you will arrive by plane unless you call us.

Will write Mom and Dad now. Time short because of boat departure. Love you very much. Lots of love to our children. 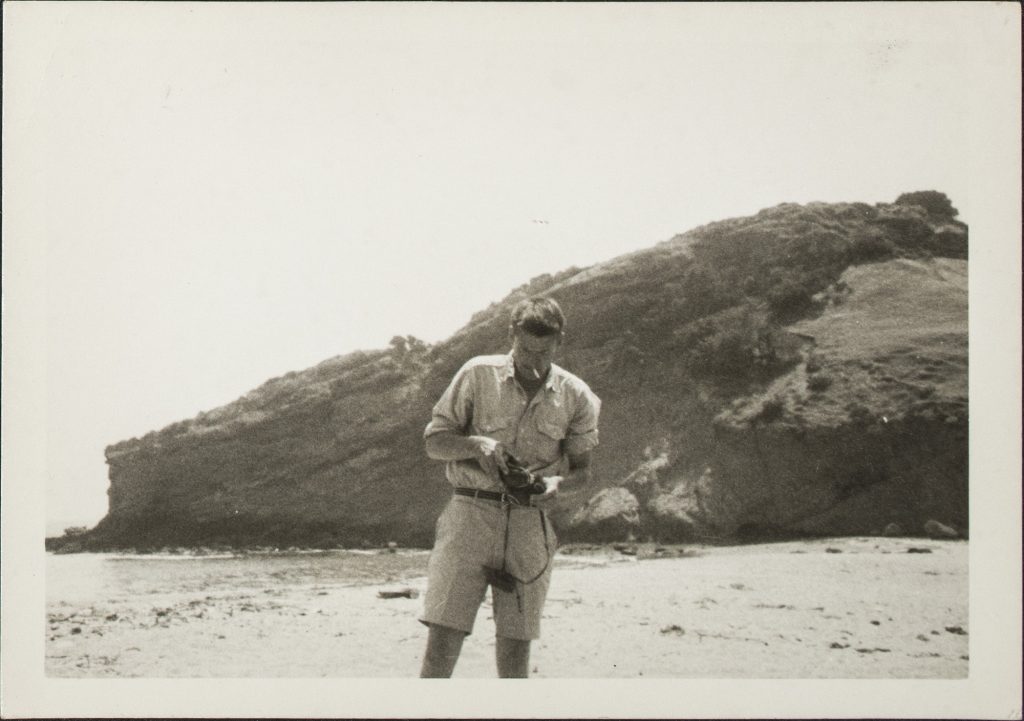 The primary goal of processing an archive is to give a collection a physical and intellectual order. One of the thrills comes from finding answers to unasked questions. In today’s From the Basement, we examine a place that stole Diebenkorn’s heart, viewing it from a new perspective made possible by photographic and epistolary finds in the Richard Diebenkorn Archives, and from family members of the artist’s friends. The place is Santa Cruz Island—a rugged and isolated piece of land measuring 96 square miles and the largest of the California Channel Islands. At the time of Diebenkorn’s first visit, the island was almost entirely in the private hands of the Stanton family. Access was achieved with the help of a Navy vessel and a one-hour boat ride.

Santa Cruz Island’s coastline, with its high bluffs, hidden beaches, and scraggy fields, provided an isolated retreat for Phyllis and Richard Diebenkorn, both exceptionally private people. Diebenkorn responded not only to its buildings and vistas, but to the atmosphere created by his dear college friend Carey Stanton. The Stanton family acquired the island in 1937. Twenty years later, Carey left behind his medical practice to live permanently on the island and run the family cattle business. Carey and Dick Diebenkorn’s friendship bled into Carey’s love of Diebenkorn’s work. He avidly collected Dick’s art, including the important early work Palo Alto Circle (1943), and over time Diebenkorn became the unofficial painter of Santa Cruz Island. It is one of the only places where we know Diebenkorn routinely worked en plein air. The majority of the works created during his numerous visits remained in Carey’s collection and are now owned by the Santa Cruz Island Foundation.

Diebenkorn wrote that the island was the “greatest, grandest of places,” and his work from the island describes what he meant. He captured minute corners and scenes of leisure, conveying the feelings of an artist on vacation who is reveling in rare moments of respite. Diebenkorn felt moved to capture the environment at Santa Cruz Island as he saw it in real time as he was experiencing the landscape. His early days there dovetailed with his representative period, and the small works are some of the most personal from that time. They are among the only sure examples we know of Diebenkorn looking and painting what he saw directly in front of him. The landscape struck a chord, as he said to Phyllis, “… I miss you more than I usually do when we’re apart. This is because there is constantly something for us to see and respond to together.” 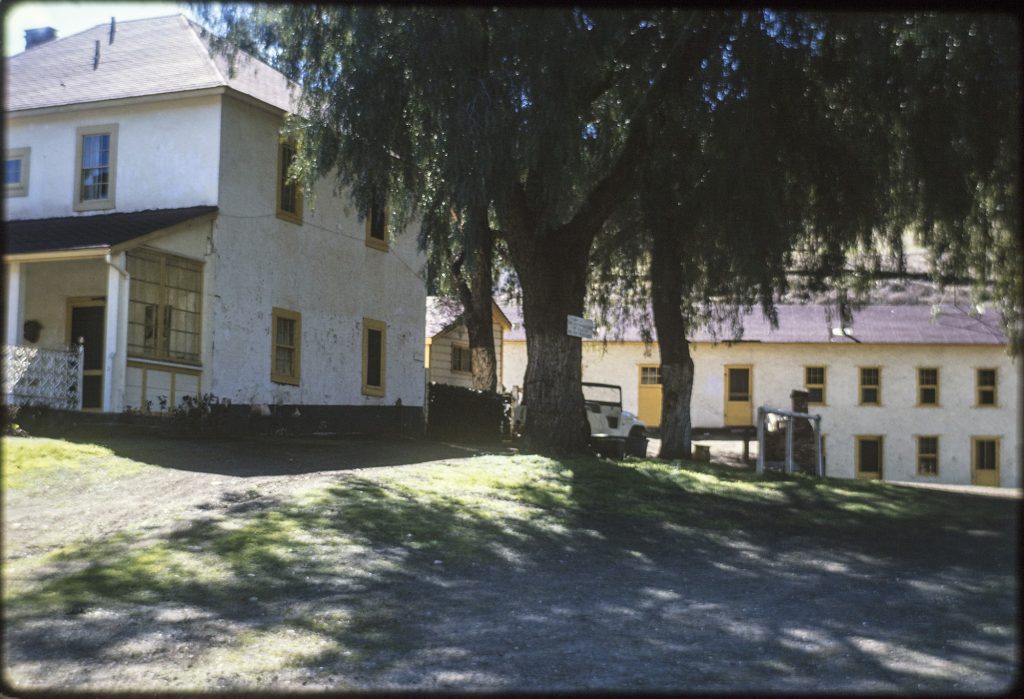 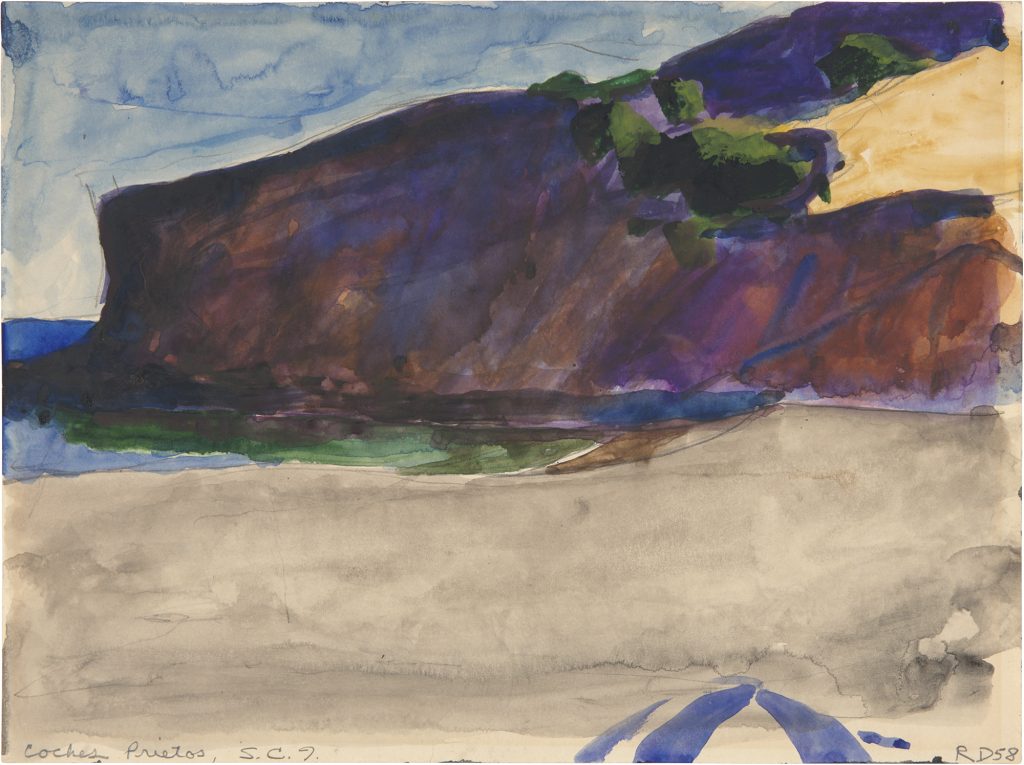 The photographs taken during their trips over the years, many of which have never been publicly seen, convey the sweeping scenes of untouched California coast, wind rustling through fields, and that very specific clean and golden Pacific light. The scenes of family and friends at rest and play, on the beach and at the ranch, show Diebenkorn entirely at ease, family members enjoying one another’s company, and friends rejoicing in a special place tucked away from the world.

Diebenkorn’s artwork from the island and the photographs are particularly intimate. Stanton opened Santa Cruz Island to the artist and his family,  making it a second home for them and other close friends. Stanton was formal, asking guests to dress in a suit and tie for dinner, but clearly playful and encouraging of raucous cocktail hours and beach picnics full of laughter. The ranch became an anchor for Diebenkorn and Phyllis and the entire island became a studio. The couple visited the island a total of 37 times between 1958 and 1988. The hot air and bright sun broke down the artist’s guard, and the island worked its way into his heart in such a way that he immediately expressed it with his hand. Like his sketches of Phyllis, his work from Santa Cruz Island is second nature and immediate.